Buddhism goes back about 2500 years to a man called Siddharta Gautama, who was born in Lumbini (today Nepal) into the royal dynasty of the Shakyas and grew up in wealthy circumstances.

Siddharta Gautama had a very good education and soon became an outstanding personality. When he was born, the wise men foretold that he would be a great leader either in the earthly world or in the spiritual world. His father was very intent on bringing him up as a ruler, shielding him from all influences that could awaken his spiritual interest.

His renunciation of Samsara

In spite of growing up so guarded, Siddharta Gautama was confronted with suffering caused by sickness, old age, and death. He realised that neither his worldly knowledge and abilities nor his wealth and political influence could help him against this suffering by which all human beings were afflicted.

The encounter with a meditating monk inspired him to leave his worldly life behind. At the age of 29, soon after the birth of his only son, Rahula, he left his kingdom. He decided for an inner journey to overcome all suffering and to develop his inner faculties.

Prince Siddhartha Gautama left his family and commenced practicing very rigid asceticism; however, he soon realised that this extreme way of life would no more lead him to his aim than the extreme wealth and comfort that he had experienced in his parental home.

He therefore decided for the middle way, and through the virtue of his meditation, perfected his inner potential. This led to his enlightenment.

At the age of 35 Siddhartha Gautama achieved Buddhahood—the state of an “awakened one.” He mastered all the feelings and actions that lead to suffering,  as well as his ignorance; and he brought all the intrinsic qualities of mind to full realization.

The realisation Buddha had achieved is not bound by any special person or culture. Buddha was a human being subject to the same laws of nature as everybody else.

Through his example he showed that everybody, regardless of gender, age or social environment, has the potential to become fully enlightened; and this can be achieved by the right training of the mind. About two months after his enlightenment, Buddha Shakyamuni began his teachings, which  he continued for more than 45 years until the end of his life. The Indian culture at that time was at its peak in religious and philosophical aspects.

The abundant record of his statements on both questions about practical daily matters of life as well as philosophical themes is due to his long teachings in such a spiritually highly developed society. In particular, his central advice was to go the middle path of one’s own experience.

Do not listen to tradition, or things told by others,

and not to religious texts or the thought: ’We respect our teacher.’

but when you have realized that something is beneficial than stick to it.’

Whatever the Buddha taught it was from his own experience, and therefore knowledge based on life. He also continually gave his students the advice to verify the teachings for themselves, and not to blindly trust even his statements.

He did not teach in order to gain students dependant on him; rather, Buddha taught so that people could realise their own inner freedom and boundless possibilities. 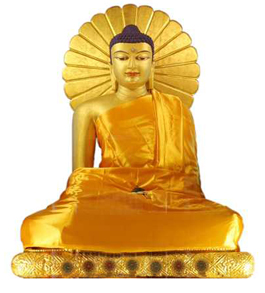